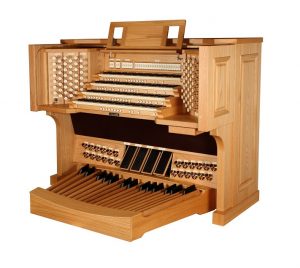 We will be showcasing our new all American designed 4-manual drawknob organ, the UNICO 800 in Exhibit Hall A, along with a new more affordable American designed 3-manual UNICO 370 rocker tab organ.  Both feature an entire array of sub and super couplers, and recently enhanced American Voices, created in cooperation with the Viscount R&D Lab and our new Viscount North America Tonal Director, Mr. Robert Darnall.

The most recent set of voices were inspired by American Pipe Organ Building from the early 20th century, and will be available for any Physis® Driven Viscount Organ. Talk about flexibility! This is why Viscount Organs truly are Your Organ. Your Sound.™ 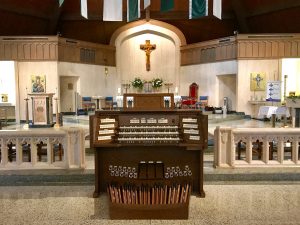 If you haven’t heard a Viscount Organ recently, we encourage you to do your due diligence as a respected organist and church musician, and visit us in Exhibit Hall A during the AGO Convention.  This way, when a church asks you about Viscount, you can say with total conviction and authority that you’ve heard the latest Viscount has to offer, and it is remarkably good for a digital organ, and should be seriously considered if a real pipe organ is not.

And of course we will have one of our home/chapel organs from our Chorum line on display, which is now one of America’s most affordable classical church organs! We will also be announcing a revolutionary new Physis® Driven product (taking pre-orders for end of 2018/early 2019) for the hybrid pipe organ market. Our new UNICO 800 will also be used for planned educational workshops during the convention. Be sure and come see why Viscount is now the largest organ manufacturer in the world by both number of consoles built annually and annual revenues (2017 and 2018 Music Trades Magazine).

Managing Director of Viscount North America, Josh Dove, National Tonal Director, Robert Darnall, and Authorized Viscount Dealer for Missouri, Kansas, and Illinois, Hatter’s Church Organs will all be present to answer your questions. We look forward to seeing you there!