Without a doubt, Bach’s “Toccata and Fugue in D minor” is probably the most famous organ piece ever written. It’s used in TV, movies, and more. But many people have only heard the iconic opening lines of the song. Few realize that the piece is nearly nine minutes long. Organ pieces and organ concertos can last up to an hour in some cases.

While these pieces are long, there is one organ piece that lays claim to the title of “The Longest Organ Piece Ever Performed.” Join Viscount Organs as we explore this piece that began nearly two decades ago, and is still going!

But who wrote this impressive piece? Handel? Bach? Neither! In September of 1912, John Cage was born in Los Angeles, California. Cage grew up during periods of monumental change in the United States. Cage studied music in both the US and Europe, working with musicians like Arnold Schoenberg and Henry Cowell. Together, the three of them experimented with new sounds and new ways to play music.

Cage’s early works used the 12-tone method, that played with new forms of structuring music. In addition to experimenting with the structure of music, Cage also played with how to create music itself. He worked with unorthodox instruments like the “prepared piano,” a modified piano that had objects placed between its strings to create new and fantastical sounds. Cage utilized the latest in recording equipment to create odd and eerie sounds.

Drawing from a variety of influences, Cage turned to the naturally occurring sounds of the world to create music. This lead to his promotion of musical indeterminism. Simply put, indeterminism follows no musical structure and uses a varying number of performers, instruments, and sounds to create a musical piece. The result was that the musical preferences of the audience were never influenced by the conductor or the performers.

This culminated in one of his most famous pieces, 4’33”, or Four Minutes and Thirty-Three Seconds. The piece is performed by any number of musicians and is played by sitting in rapt silence for the duration of the piece, either for four minutes and thirty-three seconds, or an indeterminate amount of time as decided by the conductor.

In 1987, Cage was commissioned to write a piece for a piano competition held by the Friends of the Marland Summer Institute for the Creative and Performing Arts. Cage, never one to follow the mainstream, took the opportunity to produce a truly unique piece. The result was Organ2/ASLSP (As Slow As Possible). Cage wrote the piece in an open format, allowing for the performer to interpret just how slow the piece should be performed and to ensure that no two performances could ever be the same. The piece is typically carried out over a period of 20-70 minutes, but others have taken the title more literally. In 2009, the piece was played over a 15 hour period, and in 2012 was played for eight hours.

While both of these performances certainly took their time, one group decided they would push the creative limits of the piece, and of the organ itself.

On September 5th, 2001, a rendition of Organ2/ASLSP began in the city of Halberstadt, Germany at the St. Burchard Church. The opening of the piece was a seventeen month-long pause before the first note was even played. The organ was specially built for the performance. The performance will last 639 years and will reach its conclusion in 2640, centuries after the passing of Cage, and the first note being played.

But why 639 years? Because Cage never dictated just how slowly the piece could be played, organizers got creative with their interpretation. It is widely accepted that in 1361, the first modern keyboard arrangement of the organ was built in Halberstadt’s cathedral. This organ was the first of its kind and had a claviature of 12 notes, which is still used on keyboard instruments to this day. Many argue that the birth of modern music emerged with the development of this organ in 1361. Organizers began planning the project in the year 2000. The subtracted 1361 from 2000 and got 639. They decided that the piece would last for that duration of time, as a way to recognize the creation of modern music.

The performance is so slow, that the organ that was specially designed for the piece was not even finished by the time it began. It wasn’t until 2008 that the organ was finally finished when pipes were added. The organ itself is automated to ensure that no one has to devote months of their time to playing the same note. Listeners to the performance wait literal months for a chord change. Each chord change occurs on the fifth of whatever month it might fall on. Since the beginning of the piece, only 12 notes have been played. The next chord change will not occur until the year 2020. 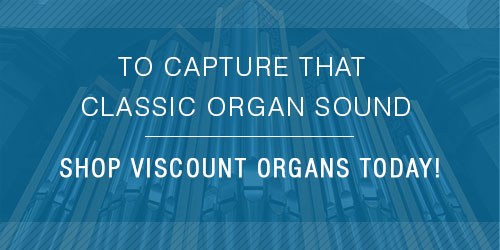 The performance of Organ2/ASLSP is undoubtedly an impressive endeavor, undertaken by a group of committed and enthusiastic organizers and performers. But we recognize that not every performer is going to commit themselves to similar performances. Fortunately for you, Viscount Organs offers a wide variety of organs, so you can play as fast as you’d like, or as slow and low as you can stand. View our fine selection today, and find a dealer near you!