When we think about the music of the Second World War, often we think of ragtime, and big band jazz, and of course, thumping marching band music. It’s hard not to have Glenn Miller’s “American Patrol” playing along in your head when you think about the service members of WWII. But for many soldiers and sailors in WWII, music was not a luxury they got to enjoy every day. They might only hear music occasionally. And oftentimes, that opportunity was only present during chaplain’s services on Sundays or before major offensives.

Yes, perhaps one of the oddest implements to find their way onto the battlefield was the military Field Organ, a pint-sized church organ. Viscount organs is excited to explore this little organ, so you can see just how far our selection of organs has come since the 1940s.

It’s easy to think of the military as an institution bathed in rigid tradition, but that’s not always the case. Indeed, during the World Wars, they advanced the causes of religious freedom to ensure that all soldiers and sailors could continue to practice their faith equally. This led to the development of the Chaplain Corp.

Since clergy members could not be drafted, the military relied on individuals voluntarily joining the military to fulfill the military’s need for moral guidance and sustaining the morale of the troops. By the end of the war, nearly 9,000 chaplains joined the war effort, with approximately 3,000 serving in Europe alone. These chaplains served alongside soldiers at the front lines, experiencing the same battlefield conditions the soldiers did. They led services, provided counseling, aided the wounded, and tragically, led last rights for fallen comrades.

Because they were non-combatants, they did not carry a firearm with them into battle. Often, they would carry a Bible, or other religious text instead. But their personal equipment included a portable altar with all of the materials needed to carry out an entire religious service. This equipment list, in many cases, included a compact field organ.

Many of these organs were made by the Estey Organ Company in Brattleboro, Vermont. Estey Organ company had been making organs of one variety or another for nearly 80 years by the time WWII broke out. They had produced similar field organs for the military during the First World War, and so, naturally resumed their manufacture during the Second. Indeed, the company focused all of their efforts on creating field organs for the military.

By the end of 1941, the company was producing nearly 500 a month for the military. To make these organs, the company had to reduce the size of all the components of a full-size organ. The result of their work was an organ that could pack down into a case small enough for one man to carry. This was typically the chaplain’s assistant, who would play the organ while the chaplain led hymns and ceremonies.

Rather than using pipes to create the sound like a traditional church organ, the field organ relied on reeds. These reeds were the same used inside of harmonicas and accordions, just much larger. Two foot pedals just under the keyboard operated a bellows inside the case to generate air and create sound. The result was that the sound of the organ was very raspy, and wispy, like a stretched out harmonica. Many have described the sound as akin to something you would hear in a haunted house soundtrack.

It’s easy to explain the impact an airplane or tank can have on the war effort of WWII, but the field organ likely made its own impact as well. By providing soldiers in unknown lands, facing uncertain conditions with the sounds of home likely gave them a sense of comfort. 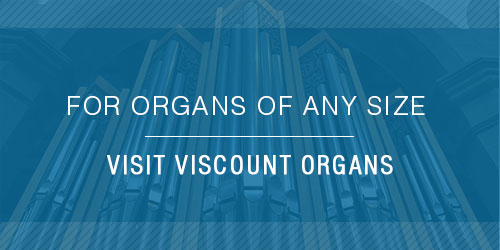 The compact size and portability of these little organs made them ideal for all sorts of post-war activities. The end of the Second World War saw an increased interest in religious services across the entire United States. As the country expanded, many packed these organs up in their cars and acted as traveling preachers and ministers, holding small services in rural towns, or in new towns that had yet to construct their own churches. For others, they were an easy way to include the melodious sounds of the organ in a traveling band.

Today, it’s not uncommon to find one of these small organs tucked away at the back of a church, or behind some boxes at an antique store. They are often painted a deep olive drab, or navy blue. Because they were simple to produce, they are simple to repair as well, and a small community of field organ restorers exists online.

If you’re looking for a compact organ that still maintains that big church organ sound, you’ve found the right place. Viscount Organs offers our Legend series of organs, which uses modern technologies to capture that classic drawbar sound. For all of your organ needs, contact Viscount Organs today!