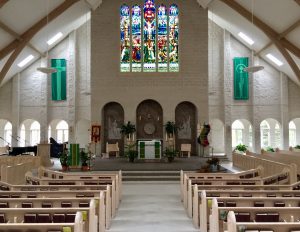 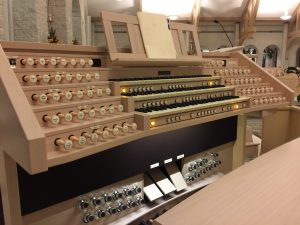 When the Covenant Community of Jesus the Good Shepherd needed a new organ, they considered all the major players, including Viscount. Admittedly, the music director knew the least about Viscount, and from a ‘brand awareness’ perspective had heard a lot more about a couple other names in the mix.  However, after a face to face consultation with a Viscount representative, the music director learned a lot about Viscount and their Physis® Physical Modeling Technology.  This project was extra special because the church knew they wanted real wind blown pipes, and they needed a company that could handle a more comprehensive organ installation.

The church did not currently have a pipe organ. Viscount was able to provide them with a custom complement of pipes that matched perfectly with their architecture and of course, musical needs.  The music director was also the organist, so a low profile console was suggested to increase visibility. In addition to real wind blown American voiced and made pipes, the organ has an entire array of digital organ voices that speak as one cohesive unit with the pipes.  Since ‘JGS’ also has blended worship, the new Viscount Organ was setup with some beautiful non-organ orchestral voices and registrations that meet the needs of today’s modern and diverse church. 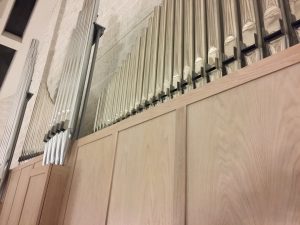 The local Viscount representative worked tirelessly to not only provide them with an organ, but really an organ meant specifically for them.  The desire during the planning stages was to make the organ look like it had always been there.  The wood in the church was very unique with a whitewashed oak. Viscount matched the finish of the pews perfectly, and built a ‘french style’ console to meet the needs of the organist.  Don’t be fooled though by the organs’ french look.  The sound is all American, along with the custom American made pipes.

Personalization was taken to the nth degree when the Viscount rep noticed the roman style archways in the church. He made sure the pipes of the new organ also had true roman mouths to match.  When considering the name of the church (Jesus the Good Shepherd), it only seemed fitting to make the pipe arrangement be formed in a ‘crown’ pattern, for the King of Kings.

When considering hybrid pipe organs, you should consider the largest organ company in the world by revenue (Independently Verified by Music Trades), Viscount Organs.  Viscount can offer you a very high quality product with truly state of the art Physis® (Physical Modeling) Technology.  The Covenant Community of Jesus the Good Shepherd understood the difference after just one face to face meeting.  Their wonderful dedication concert with the Artist-In-Residence of the National Cathedral, Jeremy Filsell, was covered in their local paper. It doesn’t cost a thing to consider Viscount. We encourage you to call and schedule a consultation with you. If you’re in North America, we’ll come to you!